2005 marked my first official sound design in musical theatre.  Well, “design” is a strong word for what I did… to scrounge up limited resources in an attempt to amplify singers over the band.  It was for Hair produced by Fritz Theatre.  There’s still an extant review for it, wherein my work received an honorable mention: “…despite some serious problems with his microphone…”  No worries though, as they got my name wrong.

Even so, that somehow gave me the edge I needed for San Diego Junior Theatre to give me a shot at designing for them.  October yielded the musical Zombie Prom, and my sister (who was a student at JT) took on the crew position of sound board operator.  She somehow survived my ego, micromanagement, and more ego, and had enough of a positive experience that she later joined Sound Kollectiv at Reed College, as a sound engineer for a wide array of events.

I mention my ego, because I want to talk about our relationship to sound in the theatre.

Most engineers probably start off with a bit of ego.  I definitely did.  Still have it too.  And it doesn’t serve anyone, nor the show.

Jerry Garcia Band ft. Melvin Seals was playing at the music venue where I don’t work anymore, and the hugely egotistical venue owner was yelling at the band’s sound engineer (who was, if I’m not grossly mistaken, Howard Danchik of UltraSound) over a request of his that I had fulfilled as the house engineer.  The engineer found a break in the childish demonstration to earnestly interject, “I just want to say thanks for having us play at your venue. It’s really great to be here.” That shut the owner right up and restored a peaceful environment for us to work in. By that time in my life (June, 2015) I had fortunately learned many lessons in at least observing my ego around sound work.  From participating in the production of theatre, I had come to understand the interconnectedness beyond my own domain, that we were all pursuing the same goal: a work of art that is greater than any individual.

I felt it important to frame the ego, because it has no place [well, anywhere.  I digress…] in the communicative art of sound.  It stands only to “muddy” the principles that enable a story to be told, whether it be in the form of a three-minute song or a two-hour play.

A teacher, mentor, and friend of mine (who created the Hilltop High Music Tech Ensemble) once told me that, “When you lose your sight, it separates you from things.  But when you lose your hearing, it separates you from people.”  This jump-started me toward a lifelong pursuit of hearing preservation, but it also helped significantly to frame my purpose in theatre: sound connects people.  Take all the production design elements of theatre, minus sound: sets, lights, costumes, and hair/makeup, and then the actors with staging, choreography, and whatever else actors do up there… it’s all visual.  If you put up a plexi-glass wall in front of the best Broadway musical ever (Cats, duh) and experienced everything except the sound, you would  have a lot of spectacle (Cats, duh) but you wouldn’t have very much of a connection with what’s happening on stage (not that you can have such a thing with Cats in the first place).  Sound breaks the fourth wall.

Let me take a moment to say that this is a conceptual, not a totalitarian, approach to how I relate to the audience that I am 99.999% of the time charged with serving.  I don’t mean to say that those with hearing (or other) impairments are incapable of experiencing a maximum potential of human connection.  I’m writing from within the artistic perspective of the medium that I perform my work.

So, as I tell my student sound board operators at JT, now 11.5 years after I smothered my sister with ego, “your job is to help tell the story.”  How that manifests can vary, and each person will have their own approach.  I provide written instructions for when specific elements need to occur, but instruct the student directly about finessing for the audience’s experience of the story.  It’s for my students to embody how best to manipulate sound as the show needs. 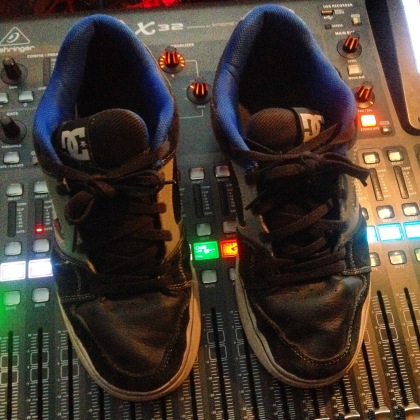 Here are my shoes taking a break on top of the console I didn’t like at the venue that wreaked havoc on my hearing, even with 25dB filters.

4 thoughts on “The Relationship of Sound to Theatre”