This one is a doozy.

Granted, I haven’t been to very many a cappella concerts where I wasn’t doing sound. But with the few I have, and with what a cappella groups have told me, sound is ALWAYS problematic.
It was a challenge to amplify the ensembles in my first few a cappella concerts. I have plenty [tens of hundreds of hours] of experience with mic technique, and it was my saving grace in those early concerts, but there was still much to be desired both in volume and tonality.  After plenty of experimentation and some counter-intuitive results, I have developed a method that has well-served the past few years of my concerts.

Let’s start off  with the problem: most collegiate a cappella concerts aren’t going to have a single handheld microphone for every singer.  This means that singers who are not on mics (i.e. the ensemble, texture, musical arrangement; the bulk of the musical content happening on stage) will have difficulty being heard by the audience. It’s no fun to be at a concert where all I can hear is piercing lead vocals and muddy beatboxing.

The first a cappella concert I engineered was a sort-of mixed blessing: low expectations and an opportunity to save the day, but no idea what I was stepping into.  The venue’s engineer suddenly couldn’t make it anymore, and I saw a post on Facebook last minute to fill the position – using the venue’s equipment (screen shot available here). It was at a local coffee shop/church (weird, but kinda cool, right?) that had random audio resources.  I still brought my vintage 1998 Yamaha 01v, knowing that I’d need compression and that their portable mixer would likely have only one semi-parametric EQ.  Luckily, the venue had some Shure Beta98A microphones which I mounted on the lead mic stands as “area” mics.  The stage was small and ensemble proximity to the mics compared to how far away the speakers were was about as good as one could ask for in this room.  So the audience was able to hear the ensemble somewhat okay… but it wasn’t ideal.

This a cappella group asked me to do sound for their next concert. At that concert, another group on campus heard my engineering and asked me to do sound for them too rather than employing the school-provided audio services.  For each concert I struggled to get the ensemble just loud enough before the “area” microphones would feed-back into the loudspeakers, but didn’t have enough time to experiment while on the job.

By that point, I still didn’t consider myself an a cappella engineer, and therefore still had a graphic EQ in my live rig, intended to manage the floor monitors I’d use for standard gigs.  I’m embarrassed to say that it took 4 or 5 concerts for it to occur to me that I could use the EQ to notch out some of the feedback frequencies from the area mics. 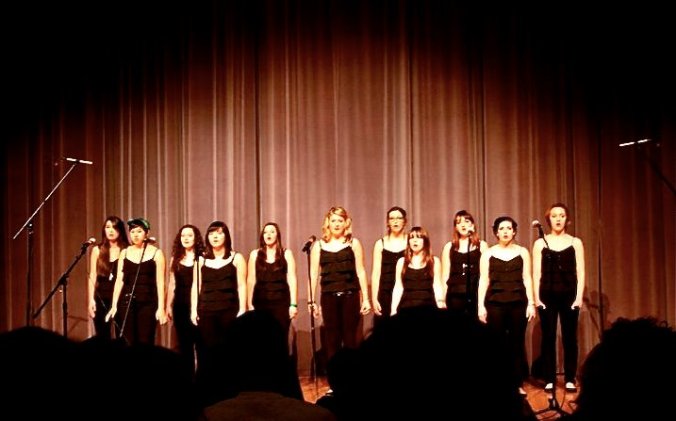 Sound Pressure.  I can’t tell you if this theory is accurate, though I can tell you that it almost always works in practice. Above is a photo of that first group I worked with, the UCSC Hightones, from the year before I did sound for them.  Notice the pencil condenser microphones on either side of the ensemble, above their heads?  That seems to be a standard attempt at amplifying a cappella ensembles.  Works okay for recordings, but not for amplification.

At first I copied that intuitive method (aim the mic at the thing you want to hear) with poor results, until I had some extra time to experiment for Acquire A Cappella’s Acquirefest 2015,  which took place inside of a large reverberant hall.  I again struggled to get enough volume from the area mics, and decided to “solo” in on the mics through headphones, to help me find a more effective mic position.  What I heard was an extreme amount of indirect reverberating sound, and very little direct sound from the ensemble.  It was a useless signal.  On a hunch, I flipped the mics from being above the ensemble to down near the floor.  The result?  SO MUCH MORE direct sound.  I theorize that near-floor location works twofold: 1) being right next to one reflective surface means that other reflections (the ceiling, floor, back wall, etc.) are geometrically further from the singers – increasing intelligibility,  while the mic is still the same distance and receives the same input level., and 2) the actual vocal sound pressure tends to congregate near the floor and thus creates more microphone input from that position.  It worked so well, in conjunction with the notch-filtering, that I’ve never attempted another method – aside from finessing position and pickup pattern.

This is not to mention that the stage looks a bit nicer without mics looming over the singers: 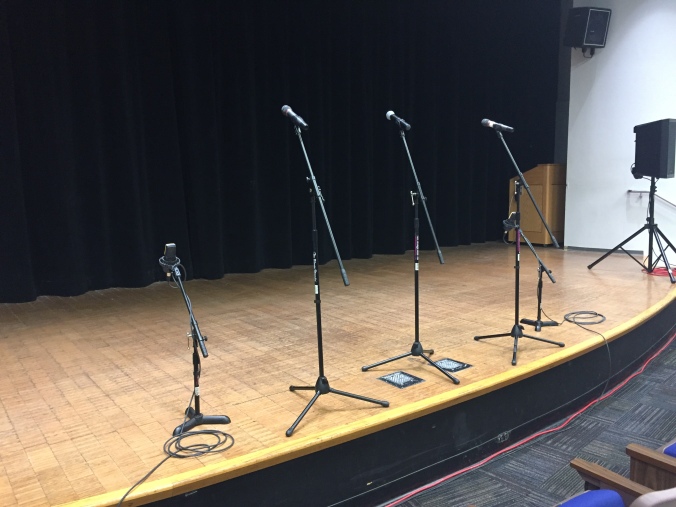 There’s another side of this situation

Why even bother with ensemble mics?  Answer: The audience needs to hear the ensemble and this requires amplification.  Loudspeakers all have their own aural characteristics, and interact with the environment around them, which also has its own aural characteristics.  This means there is a compounded effect on how sound is heard in that room on those loudspeakers, and all of this in turn affects what the ensemble mics “hear”.  So, what does this all mean?

Let’s say the ensemble mics are in the most ideal place, picking up only the ensemble singers and rejecting all other singers and reflections and spaced to have no destructive phase interactions – they are still subject to the factors of loudspeaker and room acoustics!  Yes, we’re talking feedback, but oh so much more.  Sound reproduction [loudspeakers inducing sound pressure into the room] must also be ideal in order for the perfectly calibrated ensemble mics to be translated to the ears of audience members.  This requires loudspeakers to be optimized for their particular parameters in every environment.  I’m going to stop trying to explain this aspect right here, and send you on to Bob McCarthy’s Sound System Design And Optimization because I’m not qualified to explain acoustical physics.  If you’re still intrigued at this point in my post, then maybe that book would be useful to you (it’s quite technical, not a survey of audio by any means.)  I have spent years in practice gaining heuristic and theoretical understanding of sound system optimization.  If you want to hear me ramble on about it, please use my contact page and I will happily bore you to death!

Despite all of this practice and working theory, each concert on each day in each room is a new beast to be tamed.  Even the temperature and humidity can make an otherwise unchanged setup behave differently on a consecutive concert day.  Though my touring a cappella sound system has a value of about $20,000, my real value is this understanding and finesse that I deliver to every concert.

Difficult to see, but there is a row of faders just above the sliver knobs and below the red SKB logo on the front of my rack.  That’s the 31-band graphic EQ that all of your voices have been running through.

2 thoughts on “Successfully Amplifying A Cappella Ensembles With “Area” Mics”