My education was atypical – disguised as the insatiable urge to experiment in audio production, in every way possible.  Little did I know that this curiosity would end up being slightly less costly than the university, and generally a much better instructor.  Reflecting on this education now, it becomes clear how my many failures have granted me much understanding that would have never been learned in the theoretical and safe environment of a classroom.

In one sense, I can’t remember having been accused of ever failing at a particular job/gig/project.  But in another sense, I feel that there’s always something to be learned. In my earliest years, there was plenty of room to do better, and I was hungry for opportunities to build upon my past attempts while exploring new tools/techniques/theories/etc.

One of the educational arenas that provided for a significant portion of my capabilities was working in theatre, and primarily musical theatre.  However, my circumstance was unique in that I was unwittingly isolated from extreme failures.  Any thing that I was uncertain of my ability in, was generally an added bonus to the production.  The elements that needed to work without fail, I had already succeeded with before and could accomplish without much worry.  To explain:

I had the fortune of becoming the resident (term used loosely) sound designer at San Diego Junior Theatre.  This afforded me the flexibility and safety of being able to experiment in a rather consistent environment, while the stakes for failure were not terribly high; I generally could retreat to a simpler plan if something wasn’t working out.  Furthermore, the expectations for youth theatre are not very high, nor the price of tickets for audience members to whom I might have presented a less-than stellar experience.  Some things I got away with here wouldn’t be acceptable on a professional stage (which I did occasionally find myself employed to support).

Each show’s baseline requirements were pretty standard:
– amplify the voices,
– create/implement sound effects,
– train the student board operators and set them up for success, and
– cash my check on opening night.

In my tenure of 13 years, I performed this role for 64 SDJT productions.
…But in the first few years of shows, each show presented the medium and the motivation for interesting experiments – a new philosophy on sound effects creation, implementation, or aesthetic; mic’ing techniques; loudspeaker optimization; mixing/processing techniques; orchestral amplification; syncing a live orchestra to recorded tracks; re-arranging and modifying lame “canned” musical tracks; creating a fully multi-tracked audio/video recording of a show; composing both supplemental music and a full musical score; and the list certainly goes on.

While I will proudly claim that my experiments were [mostly] successful, and that I accomplished certain feats that this theatre never presented before and may never present again, there is most certainly a list of attempted endeavors that didn’t quite have the effect I had hoped for.

To diverge, but not completely…

“The absence of evidence is not the same thing as evidence of absence.” (I recently learned this distinction from the books of Nassim Taleb, and highly recommend reading his work). Thus, in my practice, just because I am successful at something a couple of times, it doesn’t necessarily mean that I am truly capable; that I may not be aware of certain elements which contributed to my success. Rephrasing the axiom to fit my circumstance: absence of awareness for factors contributing to my success is not evidence that I was entirely responsible for achieving the desirable result. Therefore, I have trained myself to stay modest and always look for elements outside of my design that may have positively influenced the results. And in retrospect, I can attribute having learned many of my core skills by this method of observation.
This is all to say, that while mistakes have taught me well what not to do, remembering “absence of evidence” has helped guide me towards understanding a larger and stronger picture of how ideal outcomes are best achieved.

I think it will serve me best to have fun writing at greater length about my failures in their own separate and future blog posts.  But when written I’ll link to them below:

Cats Don’t Do Everything

A Wrinkle in Social Graces

Here’s a complete list of shows I worked on with SDJT, as sound designer of a full-blown main stage production (plus Babes in Toyland on a satellite stage).  There were dozens of other shows I provided some level of production or design support, but I’m only counting the whole-shebang productions – ones that received the full “baseline requirements” detailed above.

Front side of another multi-computer multi-track recording experiment, compressor/FX rack out of the way, and 32 + 24 mixer channels.  Beauty and the Beast I think. 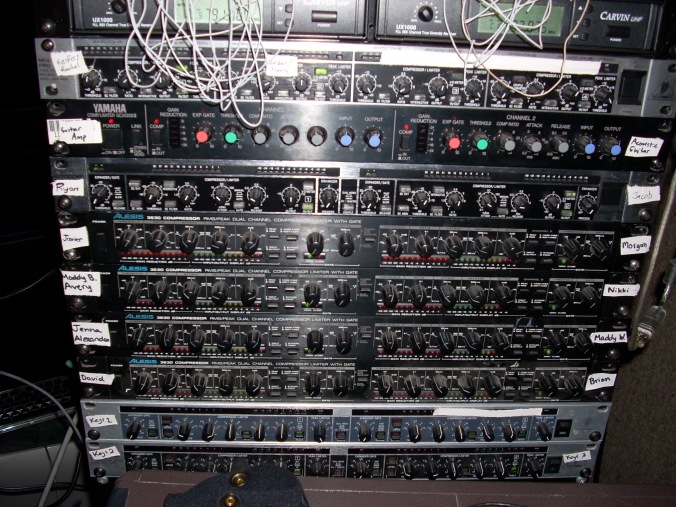 A bunch of compressors I borrowed from around San Diego – this one was Les Mis.